I was recently watching the popular Food Network show Diners, Drive-ins and Dives with the irrepressible Guy Fieri as host.  If you haven't seen it, the show's shtick for the 30 minutes is to find three out-of-the way restaurants, each with local color and some unique foods.  He then takes cameras into the kitchen and, with rapid conversation and aggressive tape editing, describes how a killer inside-out burger or Mama's Meatloaf comes to be for faithful patrons.

Why is the show popular, though??  I wondered and observed.
They shoot the show in the kitchen.  For a restaurant, this is truly gemba, the place where value is created.  The kitchens are often cramped, dingy, greasy; hardly from an ad for an appliance maker.  The chefs are not actors but cooks, people who both know and love what they do.
The fact that this is so appealing tells me a lot.  People want to know about how value is created.  They are interested in what goes on.  Dare I say, they would like to know about the process which leads to the result?  The kitchen clatter on the show is as much about technique as it is about ingredients.
The cooks are truly the experts...they know more than anyone about the product and the process.  Guy goes right to them and gets them to talk and explain.
Do we, as lean leaders, spend enough time in gemba to get greasy, to smell the burned mistakes, to feel the heat, to sense the time pressure, to realize why the flour has to be stored where it is?
And, if we do, are we not better able to explain why we do what we do, in a way that makes our gemba as attractive as the hot-dog joint at a resort?
Mind you, some gembas taste better than others.  But we can each work hard to give ours it's time to be heard.
Keep on learning.
.
Posted by Joe at 9:02 PM 3 comments:

Not that we really rush into these things, but my wife and I have talked for a couple years now about tearing out three huge, gnarly, 40+ year-old bushes in the corner of our back yard. And, once they were gone, what would we do with the 300 sq feet of space we'd expose? Gretchen settled on a pleasing, artistic plan during the winter and we awaited a break in the weather to do the deed. Last Saturday's weather looked favorable, so we rented a chain saw and went to work. 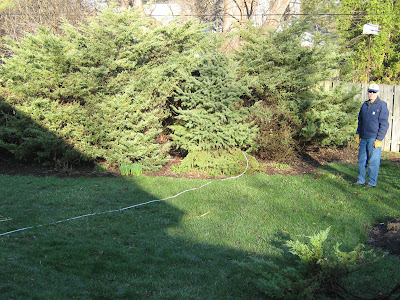 The Starting Condition
Our respective tasks became quickly obvious, due to skill and temperament. I got the chain saw and Gretchen wanted to make sure the pile of cuttings was stacked well in the street (she's on a city agency for tree health and knows the guys who pick up such cuttings...she wants to stay on their good side, you see). I waded into the bush, started removing one branch after another as Gretchen began dragging them, 2 or 3 at a time, the 40 meters or so to the street.
And it hit me; this was a process, just like any other process. So, could we improve it? And what could we learn as we improved it?
The task quickly got a lot more interesting (to me, at least) than merely a spring landscaping job. Several relevant facts became readily apparent:
So, we did some job balancing on the fly. I added to my job; when I cut a branch, I then drug it out of the bushes to a "staging area" nearer the front, reducing her walk by about 10 meters. I made secondary cuts in branches, where necessary, to reduce the size of each branch (safety) and to make it easier to stack on the street (staying pals with the street department). In so doing, I slowed the pace of cutting (improving safety and allowing saw to avoid overheating). This reduced some of Gretchen's job. She had less walking and less work to identify and pull out a branch to drag.
Our visual system to implement this work balance was using a simple, limited "work in process" inventory...I'd leave one or two branches in the staging area. When Gretchen came and pulled them out, I'd cut a couple more to place as WIP. This simple choice had two unexpected benefits. First, it kept our back yard cleaner, as all the straggling branches were in one place, not spread all over. Second, it allowed her to watch the slowly unfolding deconstruction of the bushes. This served to better decide what to eventually leave which would be pleasant to observe out of our back window.
A further learning point from our formerly ugly bush; In doing this work balance, we intentionally "under used" our rented chain saw. It could have had a much higher duty cycle...I could have had all the cutting done in a little over an hour, rather than the three hours we used. Instead, we focused on system speed (getting the branches safely to the curb) rather than point speed (cutting as many branches with the saw as rapidly as possible). 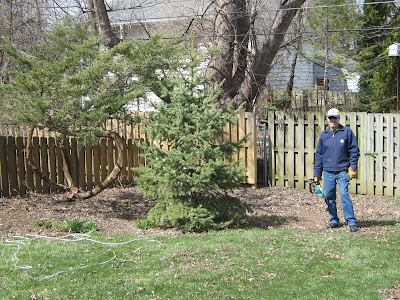 We were pleased with how this worked out. As we hacked away, Gretchen observed an unusual, circular set of large branches in one bush, which she felt we could shape into something attractive. We also kept, with a smile, a spruce which our middle son, now 30, brought home as a 4" sapling in third-grade. Somehow, that spruce has made it through three sons and over 20 Indiana winters. It has earned a little more room to prosper.
We cleaned up and sat down, together, to have lunch a little after 1pm, chuckling at how well we hit all the objectives of the morning. We had extra time to do some other tasks before cheering Butler on to it's win over VCU. One remaining task? I suspect a plate of chocolate-chip cookies might still be in order for the street cleaning guys. 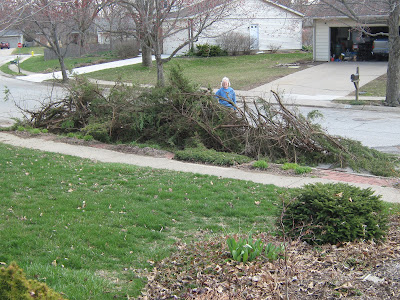 Pile o' cuttings
Processes are everywhere. And we can learn from any process, if we choose to see. Good luck on your spring cleaning tasks and learn much from them!
Click here to subscribe to Learning about Lean by email.